Punderson Disc Golf is rated the #2 course in the State of Ohio!
More information at Disc Golf Scene

The Disc Golf course is open to the public and free to play. After entering the Park from State Route 87 take the first road on the right. The beginning of this scenic course is marked by the kiosk where you will find general information on Disc Golf, course map and score card.  The first tee is a short walk as you follow the trail leading off to the right. The course is 18 holes with red, white and blue tees and features a playable island shot on hole #2 with a floating bridge to reach the island. This wooded course works its way along the eastern edge of Pine Lake. Each hole has a marker indicating the specifications and each has a beginner, intermediate, and advanced tee. If you don’t have discs you can rent a set from the Campground Check-In Station or purchase discs through the Friends of Punderson during our local leagues. The area Disc Golf Club, along with Friends of Punderson members, plan several tournaments throughout the year. The Friends of Punderson have invested hundreds of hours to build and maintain this course – we hope you have fun playing! 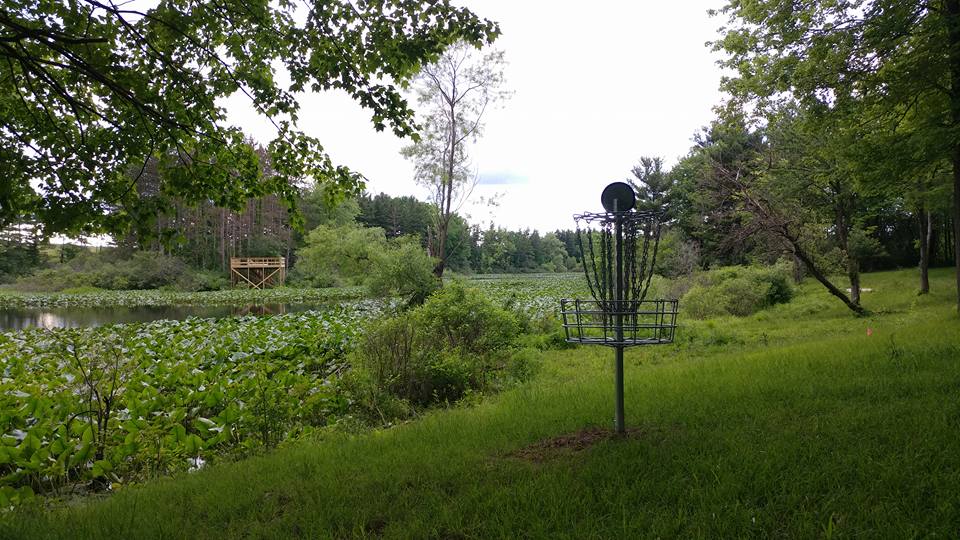 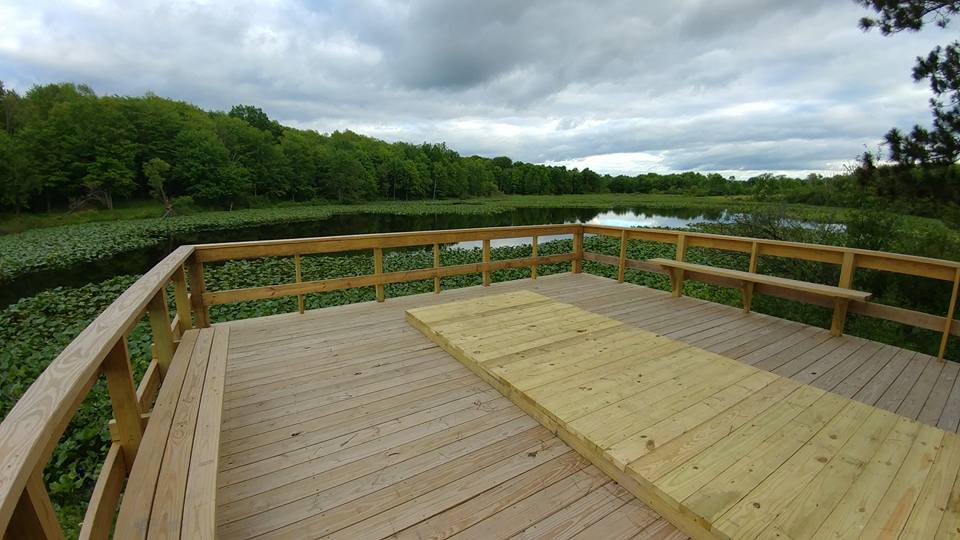 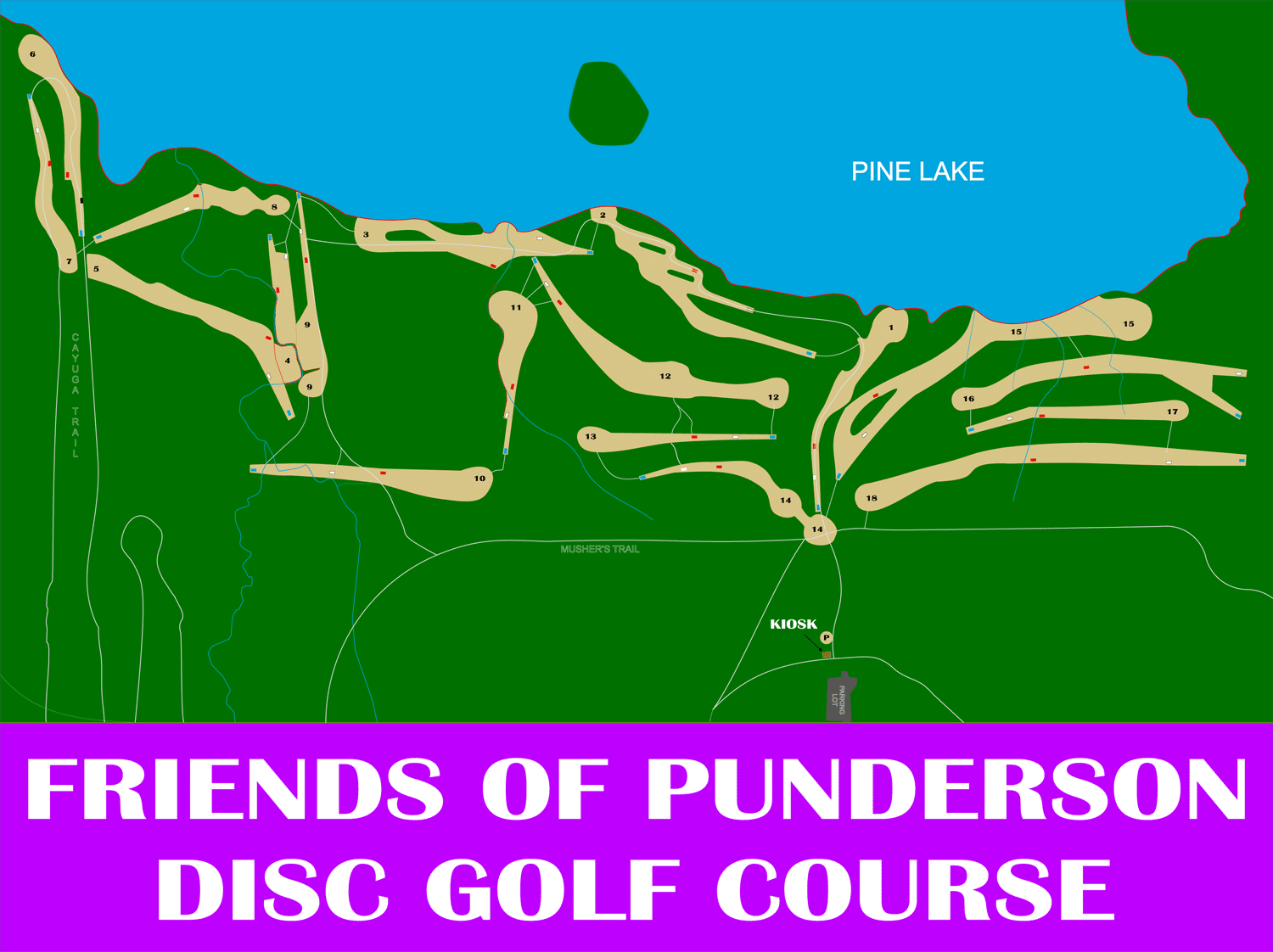 Play on each hole begins at the teeing area and ends at the target. After the player has thrown from the tee, each successive throw is made from where the previous throw came to rest. On completing a hole, the player proceeds to the teeing area of the next hole, until all holes have been played.

Disc golf courses are normally laid out in and around wooded areas with diverse terrain to provide natural obstacles to the flight of the disc. These natural obstacles are very much a part of the game and must not be altered by a player in any way to decrease the difficulty of a hole. Players must play the course as they find it and play the disc where it lies unless allowed otherwise by these rules.

TEE THROWS
Tee Throws must be completed within the designated concrete tee area. Do not throw until the players in front of you are out of range.

LIE
The spot where the previous throw has landed, mark with a mini disc or turn over the thrown disc, directly towards the hole.

THROWING ORDER
After teeing off, the player whose disc is farthest from the hole always throws first. The player with the least amount of throws on the previous hole is the first to tee off on the next hole.

FAIRWAY THROWS
Fairway Throws must be made with the foot closest to the hole on the line. The other foot may be no closer to the hole than the lie. A run-up and a normal follow-through, after release, are allowed.

PUTTS
Throws within 10 meters of hole are considered putts. A putt must be made with the foot closest to the hole on the lie, and the other foot can be no closer to the hole. No follow-through beyond the lie is allowed, as the player must display balance until the disc comes to rest.

COMPLETION OF HOLE
A disc that comes to rest in the Disc Pole Hole basket or chain constituted successful completion of that hole. Landing on top of the basket, or hanging on the edge of the basket rim do not count.

UNPLAYABLE LIE
Any disc that comes to rest above the ground is considered an un-playable lie, such as landing in a tree. The disc must be thrown from the lie on the ground, directly underneath the un-playable lie. A disc that lands in the lake will be played from the point the disk entered the lake as an out of bounds thrown.

OUT OF BOUNDS
A throw that lands out of bounds, must be played from a 3 feet in bounds from where the disc went out of bounds. Landing on or across parking lots, tennis courts, field hockey courts, o nor across any walking trail, and fence and pavilion are always out of bounds.

COURSE COURTESY
Please pick up trash and help new players play by the rules. You are the one that makes it work. By your example, Disc Golf will change your life and theirs too. Remember the most important rule: The one who had the most fun wins! Tee off & fly freely.